Brittany Schneider, Nursing Class of 2013, was awarded Nurse of the Year by her Unit, 4 South (Oncology) at Good Samaritan Medical Center.  Brittany worked on the Oncology unit as an extern before she graduated.  She was offered the position while still a student.

Richard ran the Faculty Summer Colloquia at PBA, and I miss his insights and perspective. Richard was very good at integrating history with the literature and art of the time.  I have incorporated some of what I learned from him into the DNP course, Faith and Science.

Listen to the audio below, or go to the podcast page.

After graduating from nursing school and successfully passing their licensing exam in 2012, Lizz Brubaker and Tawny Brundell joined Youth With a Mission (YWAM) for an extended internship and mission. After the training period, they joined a medical mission team in the Philippines. In Lizz’s own words:

I spent 3 months in New Zealand going through their discipleship training course in which they focus on your relationship with Jesus, and training for being ‘in the field’. I lived in house with 30 other students going through the same thing. The 30 of us were from all over the world. Some of my best friends I met in New Zealand, from all different countries and cultures. We often referred to this time in New Zealand as ‘heart surgery’. YWAM has bases all over the world, and they have numerous types of outreaches like medical, justice, worship, evangelism etc.

The Medical Team, which I was on, went to the Philippines for just under 3 months. Once in the Philippines there were multiple places that had needs so our team was split up based on skills. Another nurse and myself spent our time in a malnourishment center which was part of an orphanage. In the malnourishment center we cared for children that are sick and malnourished, and the family cannot afford to hospitalize or care for the children.

Our main job involved two premature infants who were discharged from the NICU, and the family had no resources to continue giving that level of care. We fed them through NG tubes, regulated their temperature because they were unable to and we treated their seizures, It was the most incredible experience, and absolutely life changing. We were in charge of these twins, all day, every day. We made decisions for the twins of what formula we needed to use, feeding times, feeding amounts, when to change/remove NG tubes, medications and everything else surrounding their care.

It was intimidating being fresh out of nursing school, but I learned so much and had to rely on God more than ever. 2nd Corinthians 4:16-18 was an hourly prayer! We also did medical outreaches to villages in the mountains. There are no doctors for these villages, so as nurses we saw patients, diagnosed, and wrote prescriptions for common illnesses. It is a drastic difference between hospitals here, but I feel as though the experience overseas has made me a better nurse in the U.S.

I am currently an ER/Trauma RN at St Luke’s University Hospital in Bethlehem, PA. Although I am not specifically a pediatric nurse, due to my overseas experiences, the high acuity pediatric patients are assigned to me, and I love it! I went overseas with an organization called “YWAM” (Youth with a Mission).

Daphne (Jordan) Hanson, Nursing Class of 2010 was Risinsg Star in Nursing by Palm Healthcare Foundation for 2013.  Daphne was nominated by Good Samaritan Medical Center where she is the Chest Pain Coordinator.  She is responsible for ensuring that the Hospital  meets the standards necessary to for the Society of Cardiovascular Patient Care Chest Pain Accreditation.

PBA ran a news story on her award.

Allie Gropp was named Nursing Student of the Year by Palm Healthcare Foundation for 2013.  Allie was chosen for her combination of caring attitude, clinical competence, and leadership in community service.  As a volunteer, Allie spearheaded Jupiter Medical Center’s Electronic Health Record education program.

PBA ran a news story on her award. Below is a Palm Beach Post News Story.

I just finished the most amazing book.  This book is a 1000 page behemoth.  It’s half biography, half economics treatise.  Ludwig von Mises represented the third generation of the Austrian School of Economics.  His student, F.A. Hayek would go on to win the Nobel prize.  This book chronicles his life, some of which reads like an adventure novel.

Mises and his wife escaped Vienna and fled to Switzerland one step ahead of the Nazis.  They traveled just behind the German army in France to make it to Portugal where they could get a ship to America.  Once in America, he and his Classical Liberal views and uncompromising position on the free market seemed old fashioned in a post-New Deal America.  The Nazis had confiscated all his research and writings.  So he re-wrote his major German-language work in English, becoming the classic Human Action.

It was also enlightening to learn what Academic Freedom meant in Vienna (that police and government agents were not allowed to set foot on the grounds), and to see World War I from an Austrian’s perspective.

The other half of the book (intertwined with the biography) is an exposition and summary of Mises’ major economics works.  The economics might be a bit intimidating with no background, but you can skip it if you find it dull, tedious, or bewildering.  The book was written with original source materials that were discovered when the Soviet Union broke apart.  When the Soviet Army took Vienna back from the Nazis, they took Mises’ letters notes, writings, and personal effects back to Moscow for Soviet economists to study.

As with all Mises publications, you can get the Ebook online for free or purchase it from their bookstore.  There is also a free audio version available narrated by a German speaker, which really adds a nice touch.

I highly recommend reading or listening to this book for anyone interested in history or economics.

Mises The Last Knight of Liberalism_2.pdf

Mises The Last Knight of Liberalism_2.epub
or Purchase the e-book on Google Play or Kindle.

or Buy the hardcopy book

or Listen online for Free

or Buy audiobook in MP3/CD

Ana Salguero was named Nursing Student of the Year by Palm Healthcare Foundation for 2012.  Ana was chosen for her combination of caring attitude, clinical competence, and leadership in community service.  In addition to volunteering locally, Ana has led several nursing mission trips to Nicaragua and Guatemala.

PBA ran a news story on her award. 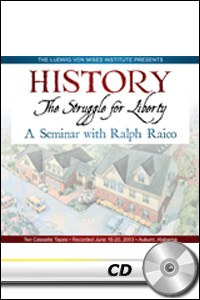 Back in 2008, Craig Hanson and I participated in a debate the night before the election on whether conservatism or liberalism was more Christian.  In preparation for the debate I came across the Mises Institute, and I  haven’t stopped learning since.  They have incredible resources for economics and history.  Lately, I’ve been listening to Ralph Raico’s lecture series, History: the Struggle for Liberty.  It’s a history of the Western world focusing on issues related to liberty.

Dr Raico attributes the rise of liberty in Europe in part to the separation of power between the Church and temporal rulers.  Rulers have always claimed divine authority, and in some cases, outright divinity.  The separation of religious and state authority in Europe helped create an environment where competing centers of authority allowed the rise of unprecedented personal liberty.  His delivery is engaging, and I highly recommend this series to anyone.

You can purchase it on CD or

Are you coming? Then RSVP below!